No Result
View All Result
Home All Sapphire

Everything you need to know about Ceylon Sapphires

by David
in All Sapphire
0 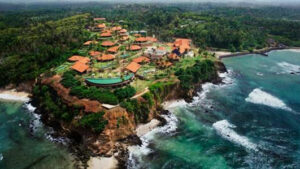 The Island of Sri Lanka formally known as Ceylon sits off the southern tip of India surrounded by the Indian Ocean. Early explorers from around the world once designated this place as the jewelry box of India due to the high-quality gemstones found throughout this island. Sri Lanka has stunning beauty from the beaches to the countryside surrounded by rain forests and a wealth of wildlife. While it is known for many things such as its tea, hospitality, and spices, the thing that has made it world-famous are the Ceylon Sapphire that is being mined here for the past thousand years.

While the precious stone was first discovered in Sri Lanka, today top quality Ceylon can be found elsewhere in places like Burma, Madagascar & Mozambique. Production methods are usually very simple and involve minimal use of technology. The stones are mined mainly from alluvial deposits and underground gem-bearing layers, which are worked from the trenches and hand tools.

Sapphire mining in Sri Lanka is typically handled by local families who live in and around the mine. Sri Lanka is one of only a few countries around the world that has strict mining laws, with no child labor, no strip mining, and once the mine is depleted, it is filled back allowing for the land to be used for agriculture. All of these laws are enforced by the government itself, which makes these gemstones even more precious.

Why Buy a Ceylon Sapphire?

Most people know Sapphire’s as beautiful blue gemstone that adorns the rings of celebrities and royals all over the world. But did you know that sapphire actually comes in every color of the rainbow from green, yellow, purple, pink, orange, and even a combination of two or more colors? If a sapphire gemstone is red, then it is called Ruby.

For many centuries, Ceylon blue gemstone has been treasured by royal families around the world. Occasionally, people will mistakenly describe gemstone from other origins as being Ceylon because the Ceylon blue hue is the most sought-after color in the sapphire family. The Sri Lankan Gem and Jewelry Association refer to the gemstone originally worn by the late Princess Diana as “The Blue Sapphire”. It was originally mined as a 32-carat rough ore and was later shaped into the 12-carat jewel that adorned the Duchess’s ring. Today, as it adorns Kate Middleton’s ring, it stands as a perfect representation of royal elegance.

The history behind the Ceylon sapphire?

Blue Ceylon Sapphire was first discovered in the gem city of Rathnapura, Sri Lanka. The reason it’s called the Ceylon sapphire is that Ceilão was the name given to Sri Lanka by the Portuguese in 1505 when they found the country. Later, the dutch changed it to Zeylan, and when Britain occupied the land in 1798, they transcribed it as Ceylon. When the country gained independence in 1948, it was known as Ceylon until it was officially named Sri Lanka’ in 1972.

Sapphires from Sri Lanka are still referred to as Ceylon and are broadly used in sapphire engagement rings and other fine jewels. Ceylon sapphire’s radiance, and attraction will continue to capture the hearts of many around the world. In the year 2003, blue sapphire was even declared as the national gemstone of Sri Lanka.

In November 2014, at the Blue Belle of Asia, a 392.52-carat Ceylon sapphire was sold for over $17 million, setting the record for the most expensive sapphire ever sold at auction. This record-breaking sale is proof of the fast-growing sapphire market and the high value that sapphires can fetch during auctions.

Where do the best quality Ceylon sapphires come from?

Most valuable sapphires come from, Kashmir, Burma & Sri Lanka ( Ceylon ) Kashmir sapphires are now almost non-existent since owing to its disputed status, no new gem has been mined here in the past several decades. Burma still produces some fine sapphire, but most mining there is focused on the ruby.

It is noteworthy that Sri Lanka is not only the largest producer of high-quality sapphires but the Gemstone mines there are amongst the oldest in the world. According to the records, Ceylon was already recognized for sapphire by the 2nd century A.D. and there was an active international trade in Ceylon gems by the 4th and 5th centuries. Many of the most famous sapphires in the world come from Sri Lanka, as well as the Star of India (563 cts) and the Logan Sapphire (423 cts).

Currently Ceylon sapphire faces rivalry from new finds of high-quality material from Madagascar. But Sri Lankan stones remain to be an important factor in the marketplace with recent surveys by geologists estimate that less than 20% of the Islands deposits have been found to date. Ceylon sapphire has been appreciated for its vivid hue, which tends near a lighter and brighter blue than the dark blue sapphires from  Australia and Thailand.

While, Sri Lanka is a small country, smaller than Ireland and Austria, the amount of sapphire mined it is amazing. Sapphire was so plenteous in Ceylon that lower grade material had been ignored. As lower grade material was pale and cloudy from an excess of titanium. In the 1970s gem labs in Thailand discovered a way to turn these sapphires into gorgeous vivid blue. Plus, new heat treatment took a flow of new Ceylon sapphire on to the marketplace, as stockpiles of once unusable material grow into saleable. Furthermore, the Ceylon sapphires have been heated with beryllium to produce vivid blue and bright yellow sapphires from pale and poorly colored material. These lattices- diffused sapphires are selling for surprisingly high prices. This is why a sapphire report by recognized laboratories like the GIA or AGL is essential.

What Color is Ceylon sapphire?

When the word Sapphire is heard, blue is the color that immediately comes straight to mind. In fact, most people believe that blue is the only color Sapphires are available in. Blue Ceylon Sapphires from Sri Lanka are known for their vivid transparent tone and saturation with evenly spread pastel to a rich blue hue.

While padparadscha is the rarest form of Sapphire, it’s the finest Ceylon sapphires that receive the highest bids at auctions. Blue sapphires are the most popular color gemstone in the world, second only to a diamond. Additionally, sapphire is the second hardest gemstone (second only to diamond) with a hardness rating of 9 on the MOHS scale, making it extremely durable and everlasting as well.

What Blue Sapphire should I buy?

What does Ceylon Blue Sapphire mean?

Blue sapphire is the birthstone of people born in September. It is repeatedly linked with sacred events throughout history and considered the gem of gems. It was a symbol of power and strength, but also kind-heartedness and wise judgment. Sapphire gemstone was believed to preserve chastity, discover fraud and treachery, protect its wearer from poison, plague, fever and skin diseases, and had great power in resisting black magic and ill-wishing.

It’s common to find these gems in jewelry worn by the clergy and high priest of many religions across the world. In many versions of the Bible, sapphire is considered to be one of the stones in Aaron’s breastplate.

Buying An Engagement Ring – How Much Should You Spend?

The Science Behind Sapphire Ring Prices

The Science Behind Sapphire Ring Prices